It was inspiring to see the energy and commitment of all the people from across the world, doing amazing things to conserve indigenous foods and cultures, diversity in agriculture and diets, and ensuring environmental sustainability and biodiversity conservation.

Although our contexts are different, we are fighting the same fight, homogenisation, commodification, and destruction of lands and knowledge.

Thank you for doing what you are doing, and thank you to the Slow Food Youth Network for existing, and allowing for PolleNation to participate. 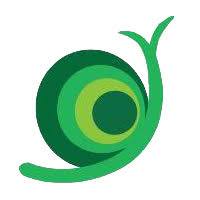 Posted by liliana trans-planter at 22:18 No comments:

We AMbush the Joburg EcoMobility Festival

PolleNation was invited to transform a space, as part of the "Our History of Transport"exhibition, coordinated by The Coloured Cube, as part of the EcoMobility Festival. This Space Making component, is just what PolleNation's AMbush activations are intended to do, to facilitate the creation of productive, multifunctional and meaningful urban spaces, reflected local interests and local diversity.  See below to see exactly what transpired ;) 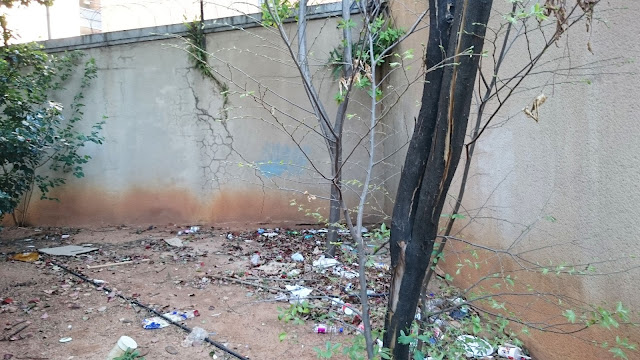 Before Shots of a neglected area in the old Sandton Taxi Rank, which is now being used for the EcoMobility Expo. 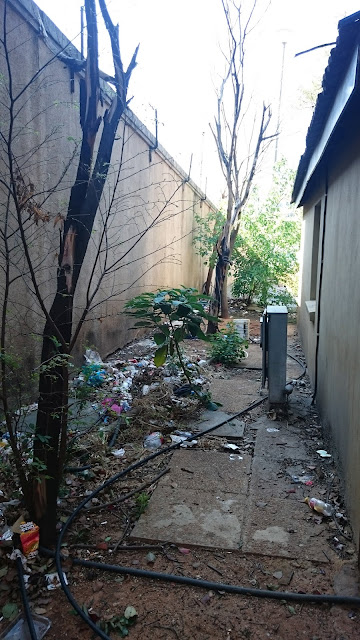 This site was truly a sight to sore eyes, with years of neglect, being used as dump site for  all types of materials including Car Oil.

This eco-art activation Used a variety of mobility and transport related materials, all of which were repurposed and upcycled, the space was transformed into a magical pathway, bridging the gap between current understandings of space, waste and transportation, and finding ways to reimagine new possibilities. 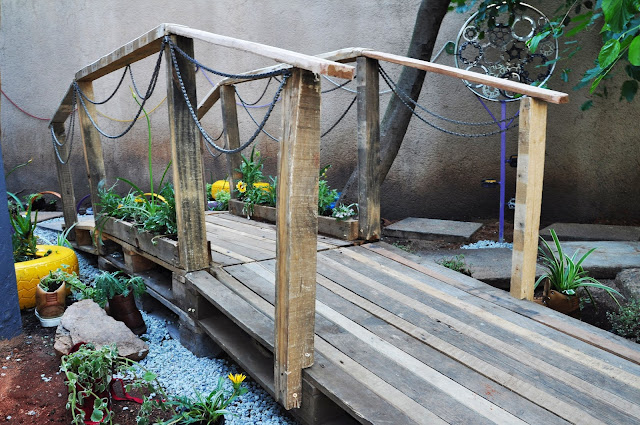 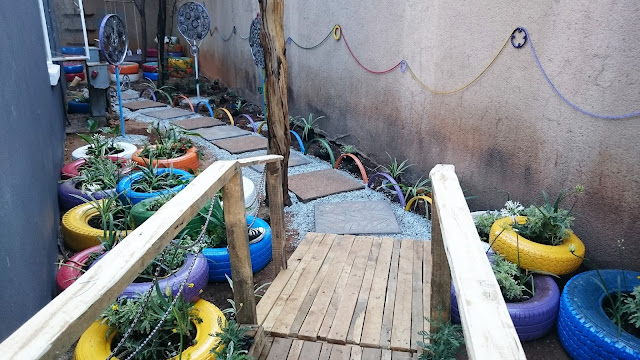 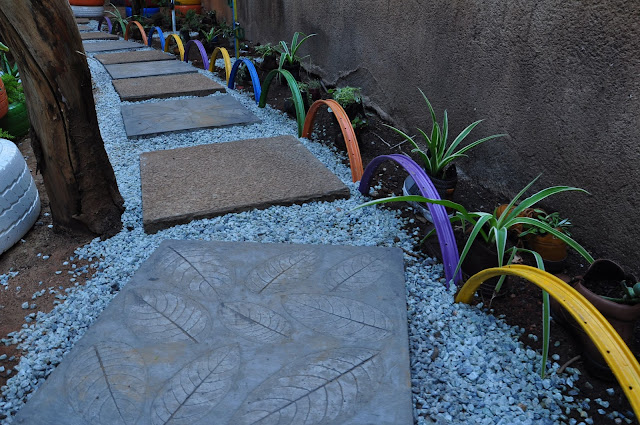 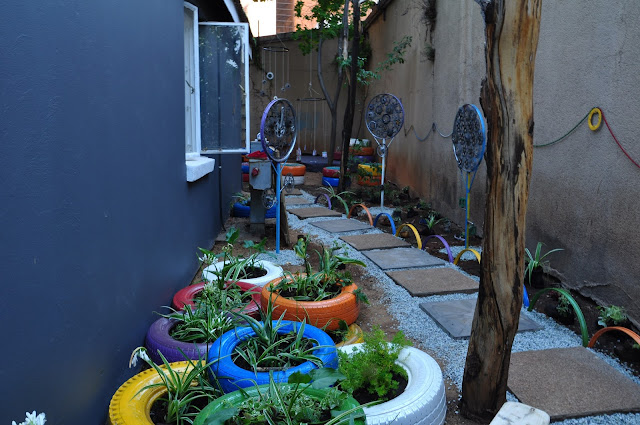 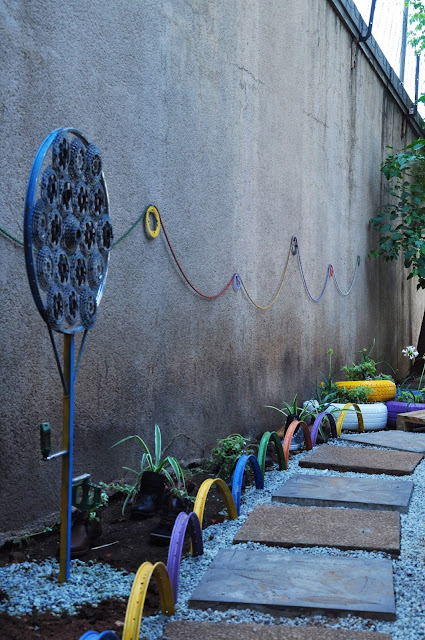 This area has become an intimate space for story-telling, sharing experiences, and generating       ideas for a better future. 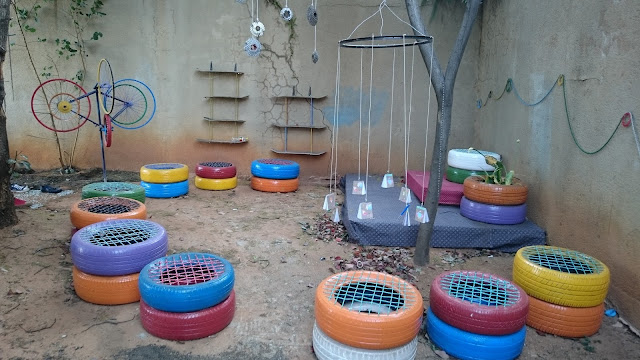 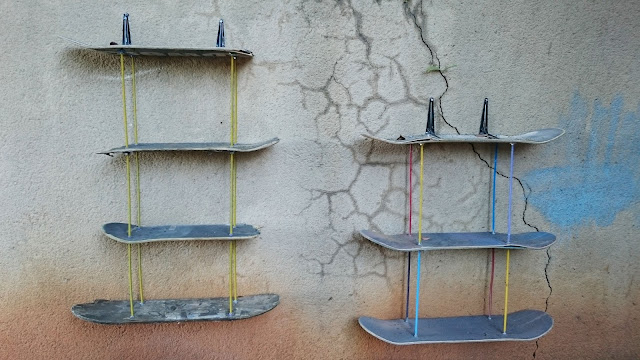 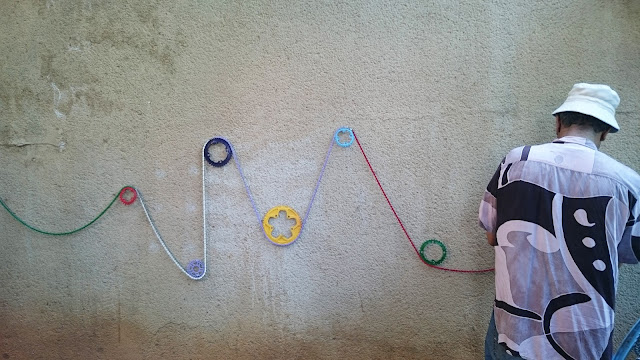 Merve The Swerve In Action! 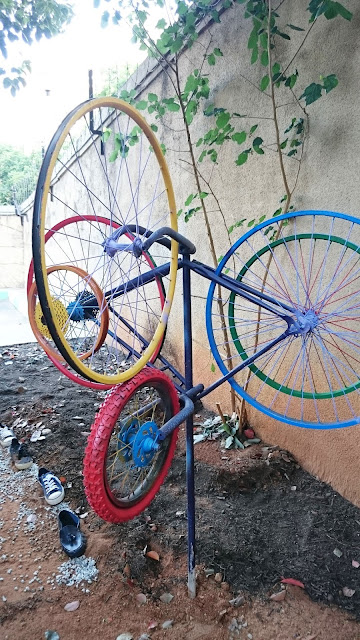 Activating and Interacting with trees, as part of the Eco-Mobility Festival, reimagining space,          waste, and mobility 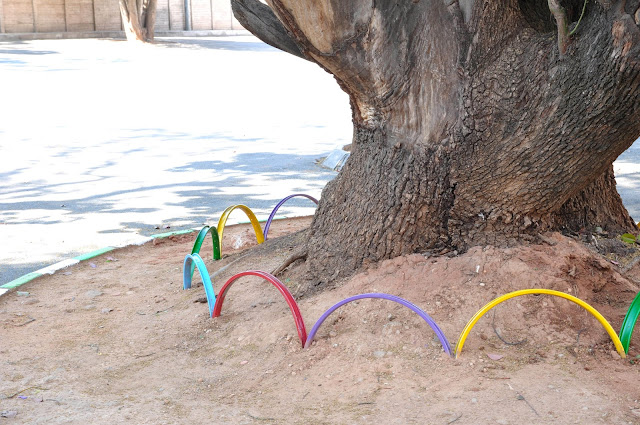 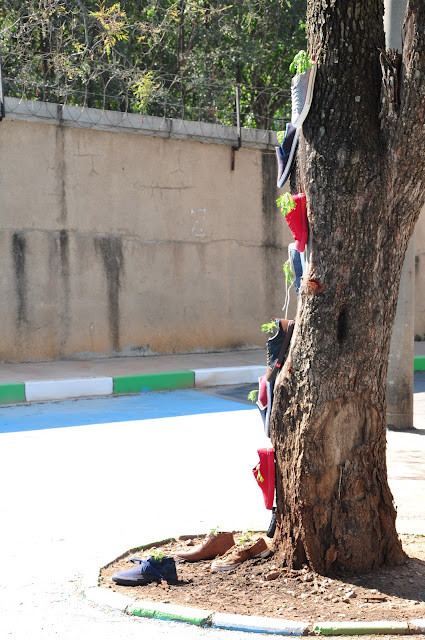 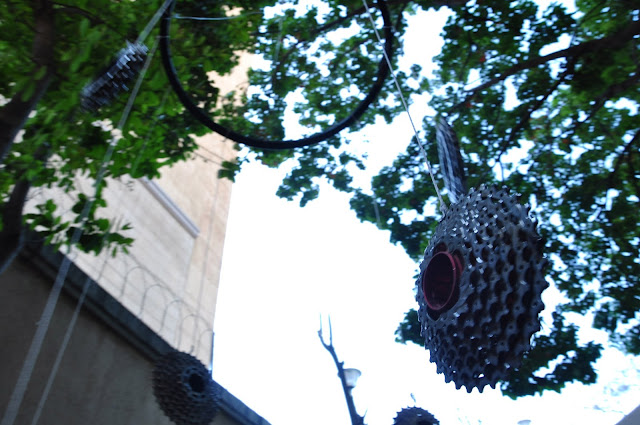 Posted by liliana trans-planter at 21:47 No comments:


Liliana Transplanter was involved in the Absolut Residency, Transform Today,  in May 2014. See the wonderful co-creations here!!!


Posted by liliana trans-planter at 23:52 No comments:

Mai Mai Market AMbush in Collaboration with 1:1 and PublicActs

Capturing Stories and Meaning Through Transformation and Symbolic Planting

Our Heritage is only the Beginning!

The Mai Mai market, with its embodiment of African (primarily but not exclusively Zulu) culture, exists within our city. Currently it operates somewhere between the formal and informal, somewhat hidden from the majority of the citizens’ eyes.

This space can become a site where we acknowledge and share the ecological and cultural heritage of this country and this region, and find ways to ensure that intercultural and intergenerational exchanges take place, to make this city representative of this country and this continent, and make an inclusive society, where we understand each other better, learn from one another, and celebrate our common history and future.


The Story-Planting PublicAct aimed to capture stories and meaning of KwaMai Mai, a traditional muthi market in the inner city of Johannesburg, through transformative and symbolic planting.

Through a series of participatory processes and engagements with a variety of local space-users, we were informed about the connections and values people associate with the market, and what the market contains and represents. 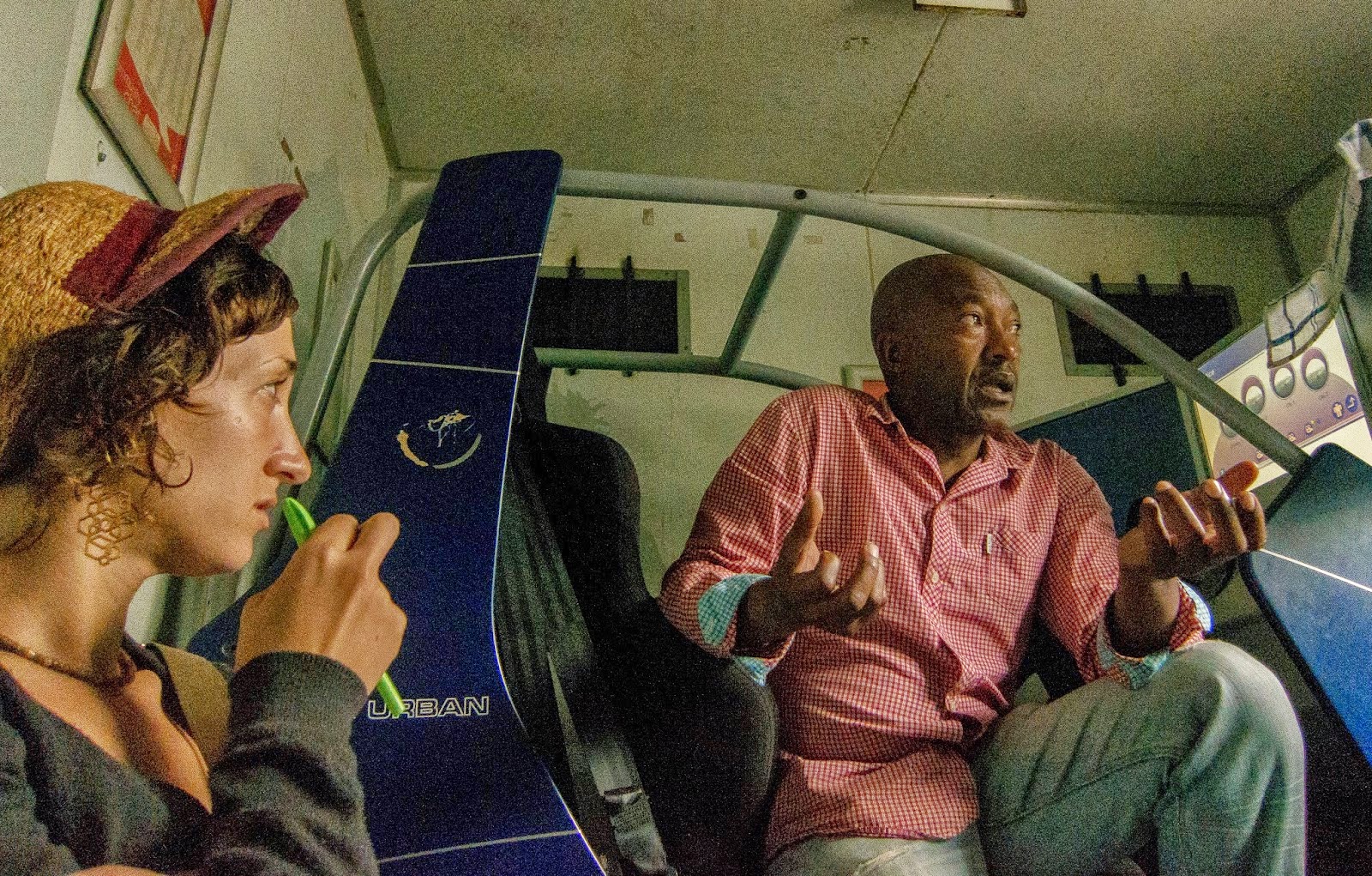 We had many formal and informal engagements with local leadership, traders, customers, and passer-bys inside and around the market. This was primarily a trust-building process, but also served as developing a relationship where we could potentially facilitate a process to undercover shared meaning and visions for the future of Mai Mai.

Speaking with this range of people allowed us to understand the diverse perspectives, interests and needs in such a dynamic and complex environment, trying to understand how decisions are made, how conflicts are resolved, and power dynamics.

This was also crucial in building a relationship and trust with local stakeholders and community, to ensure the process is participatory, collaborative, relevant and lasts beyond the activation.

We facilitated two exercises to explore the meaning of Mai Mai, and the knowledge inside Mai Mai, using plants.

Dialogue with the Elders about the Heritage of the KwaMai Mai market, and the heritage within Mai Mai.

Traditional knowledge surrounding medicinal plants is also a very sensitive issue, and therefore needs to be carefully approached. That is why throughout this activation, we only used plants which everyone knows and has an experience with, and does not conflict with anybody’s intellectual property rights. This would allow for stories to emerge, around the significance of these plants in their lives, without limitations and conflict.

The first was with a group of elders, who we invited to join this conversation.

We uncovered a variety of beautifully intimate stories of people’s lives, cultures and connections to this space, as well as to what the space holds.

The session ended with a ceremonial planting of Aloe arborensis, an indigenous aloe with many medicinal properties, in a wooden palette. A beautiful final touch was when one participant suggested we put the palette on the roof of Mdu’s container. A lovely addition to the dark, polluted cooking space.

Following this engagement we continued to conduct interviews with the people within the foodcourt in Mai Mai. We were unable to speak to the people inside the actual market, out of request from Mdu, as this requires a certain amount of protocol due to the many tourists and researchers who come to that space, which disturbs many of the traders, nyangas, sangomas and residents of the space. During the interviews we spoke to many people who make their livelihoods through this space, and many of the meanings revealed the economic benefits of working here.

The actual space that we finally decided to transform for the festival was decided by Mdu, as he cleaned up a space in the food court, following our discussion with the elders. Such a locally initiated outcome is something that we really were inspired by, and how this decision was made 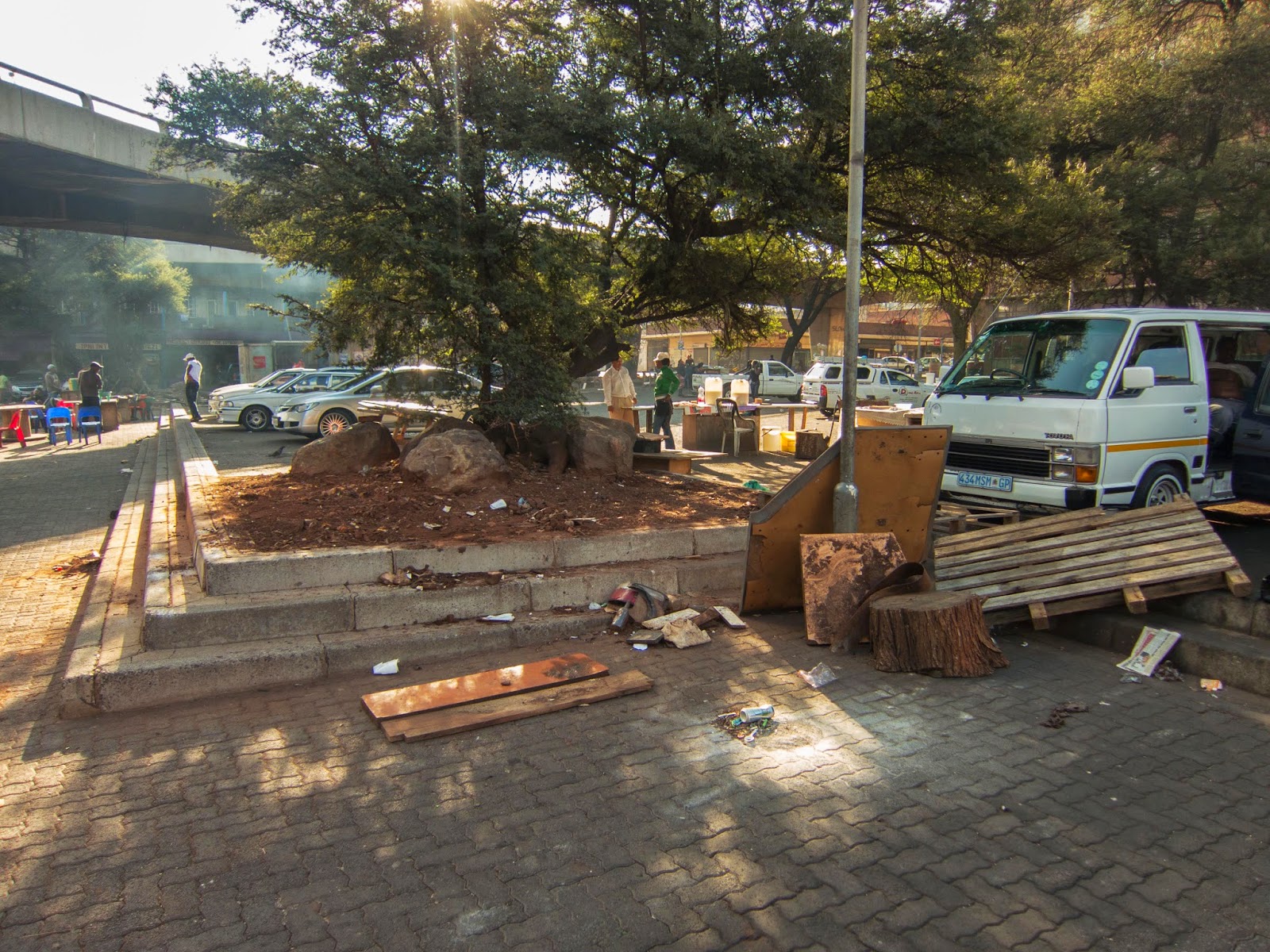 The PublicActs/Johannebsurg activation at Mai Mai used the meanings that were uncovered through the previous engagement to continue the research.


We wrote 11 meanings onto cut palettes, and asked people present and passing-by to plant in the box with the meaning that they identified with. While doing this we planted in the area that Mdu had cleaned, and variety of locally indigenous plants, which have some medicinal and cultural value. The plants were selected as they are not sensitive, and almost everyone would have some knowledge, experience and story about the plant, as they are commonly used plants. 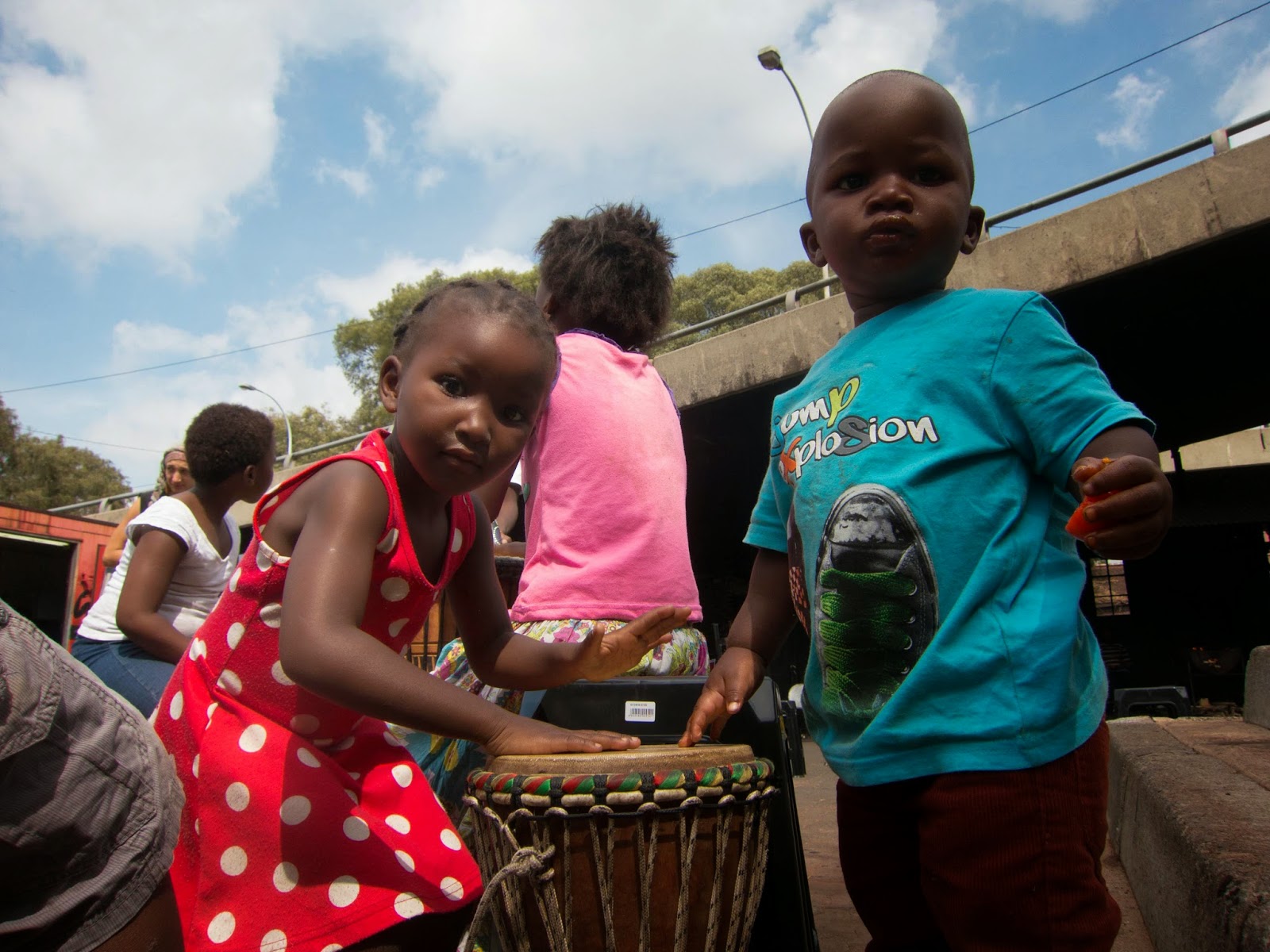 Children drumming, being part of the activation 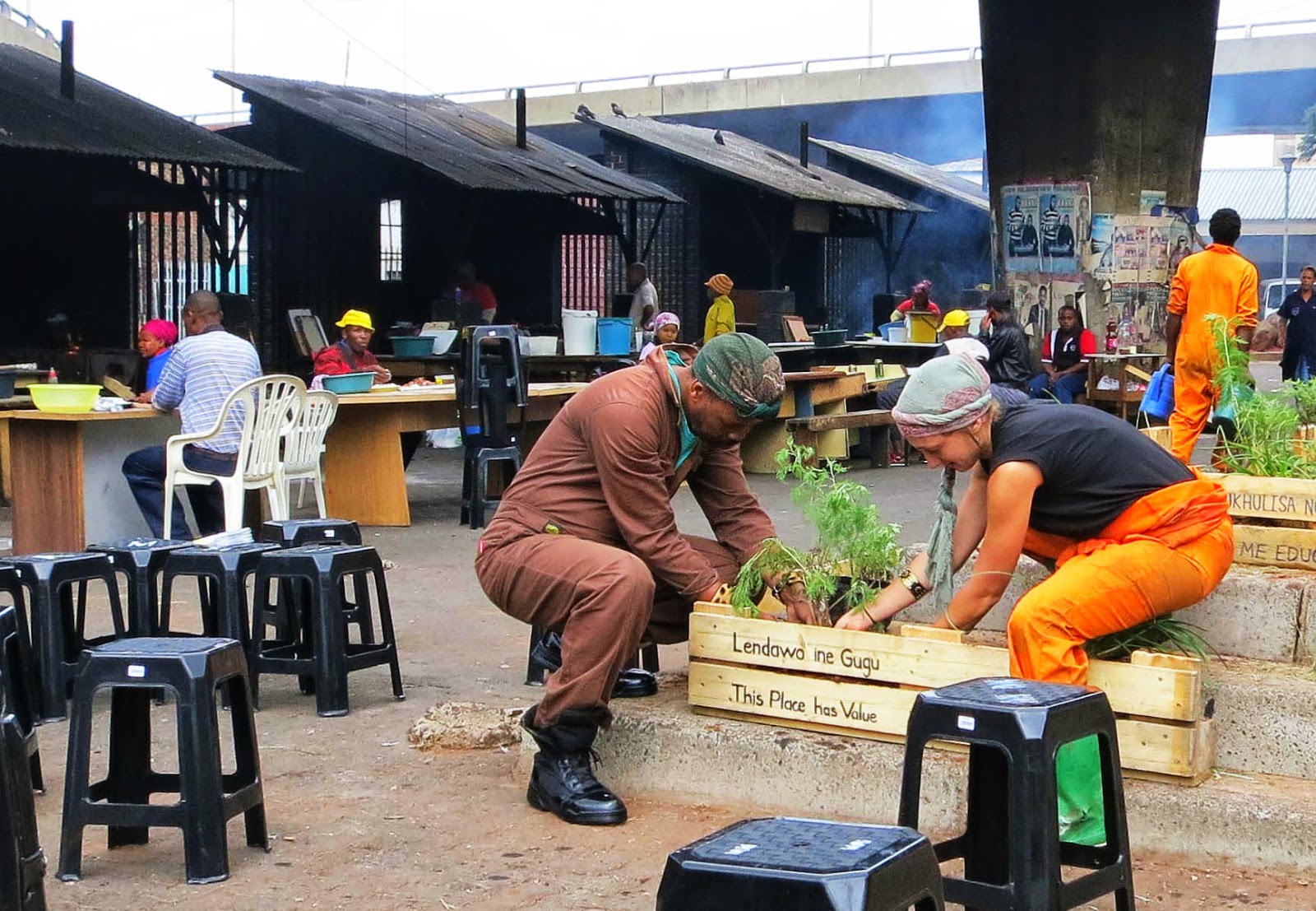 Passer-bys and Participants were asked to plant a plant in a container, with a meaning that relates to them. Meanings were captured during the discussion with the elders, and in interviews with some people who use and trade in the market.

Here you see Liliana planting with the Nduna (chief) of the Mai Mai.
This container says: "This Place has Value"
(photo by Jhono Bennett, 2014) 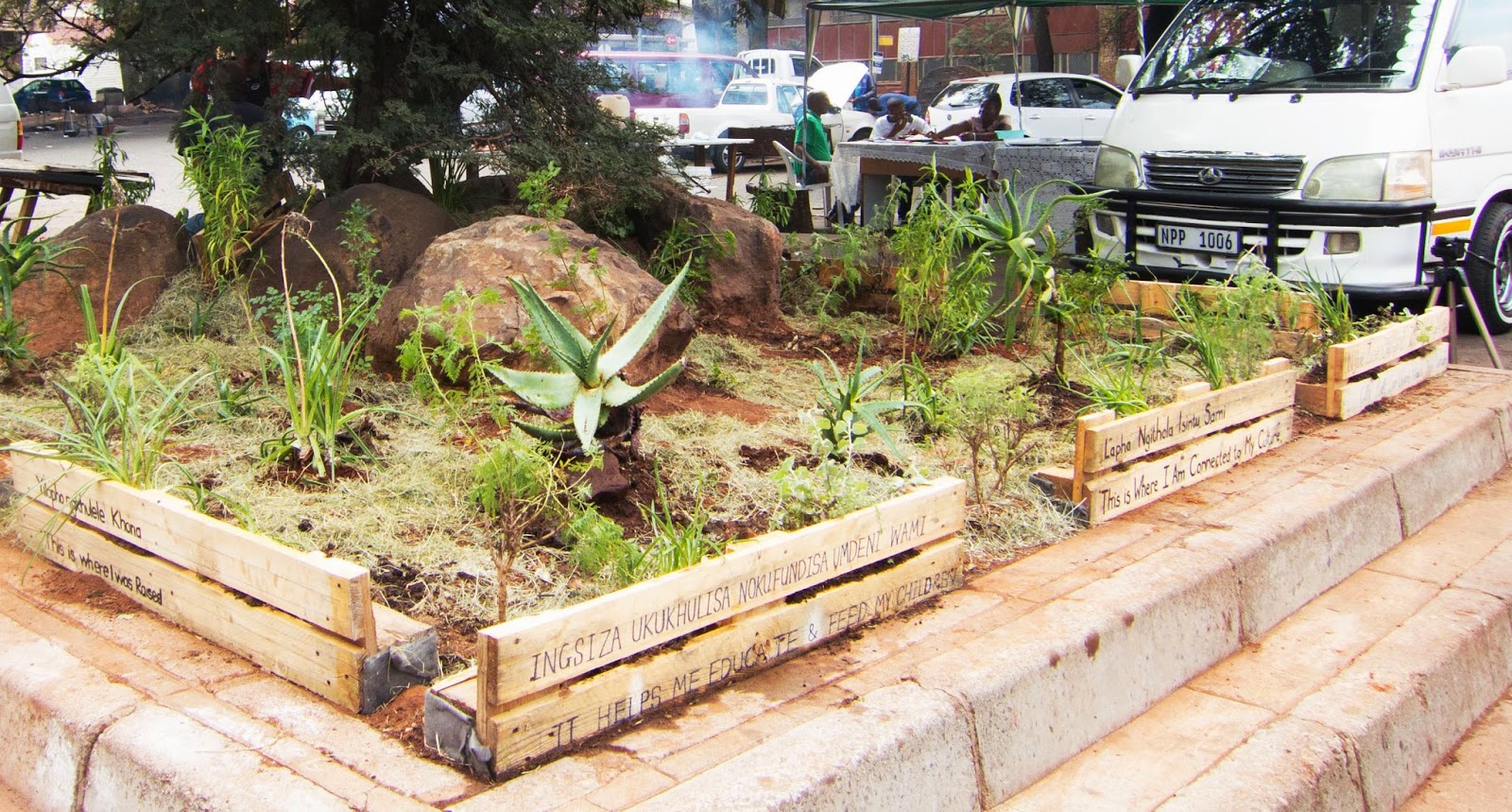 
A final, transformed space, capturing a variety of meanings and values that people hold to this space.
Posted by liliana trans-planter at 02:41 No comments: 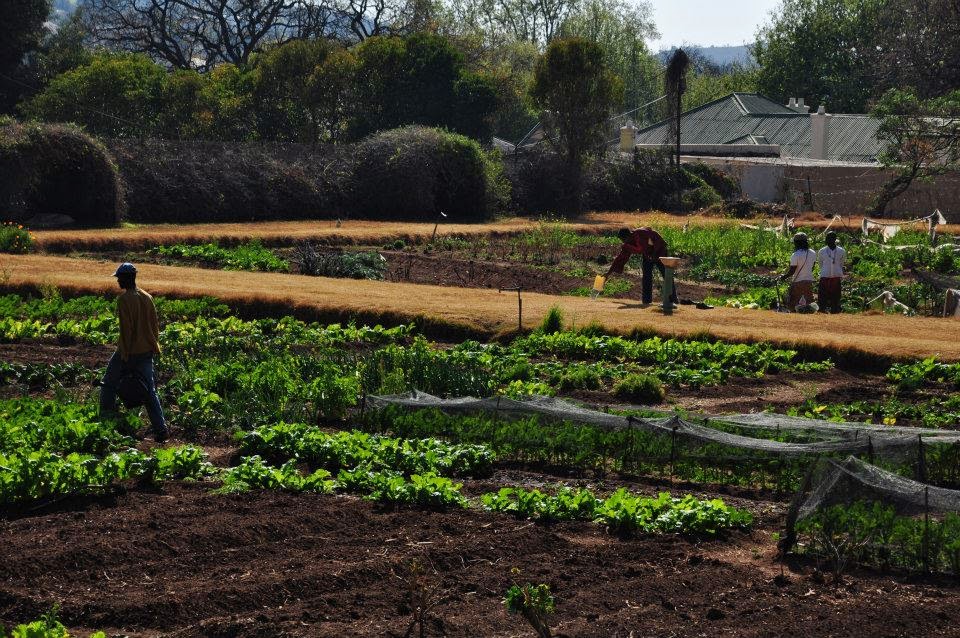 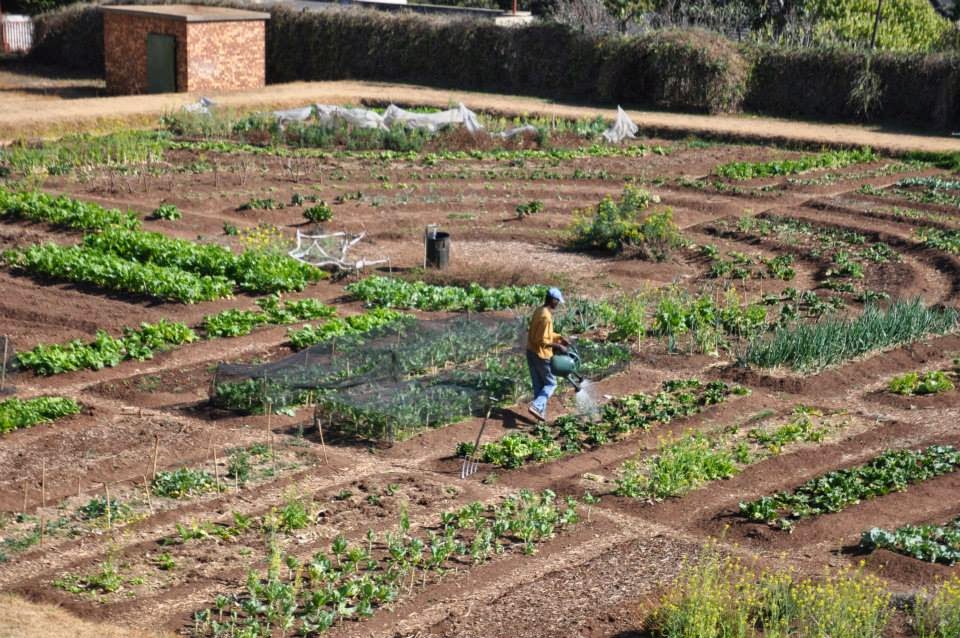 The Freedom Farms is a project we are engaged with, at our 1st experiment site in Observatory.

Here we transform "forgotten" Old bowling greens into beautiful, productive, permaculture gardens.
We work with a variety of individual subsistance farmers, primarily from across the African continent, which grow a variety of plants, some of which are also from various sources in Africa. 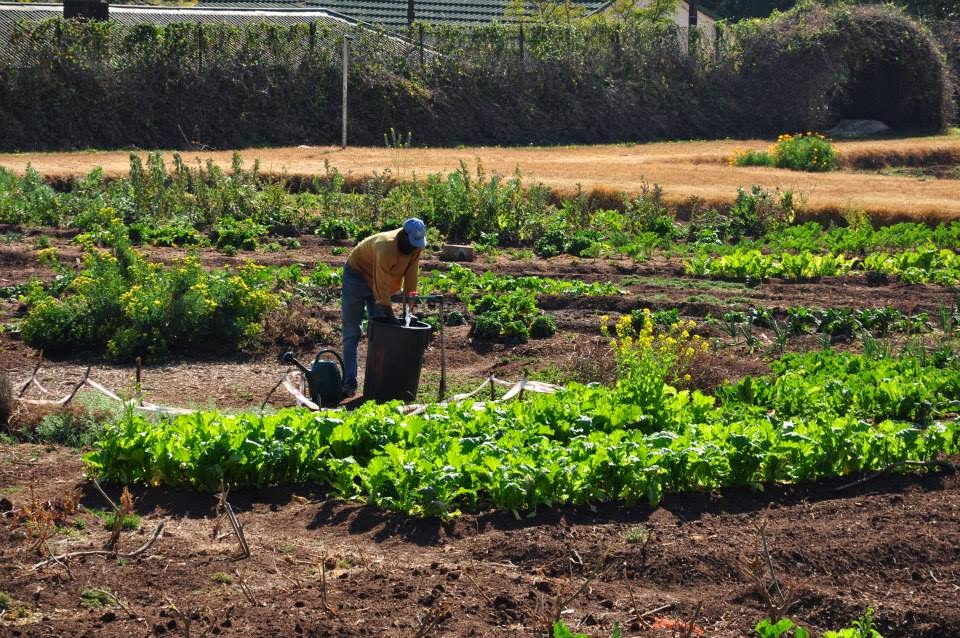 We aspire to creating small scale agriculture and agroprocessing, as part of generating sustainable livelihoods through urban agriculture. This would also then feed into local markets, primarily the informal trade economy, to ensure quality, affordable and accessible foods, ie food security and food sovereignty. 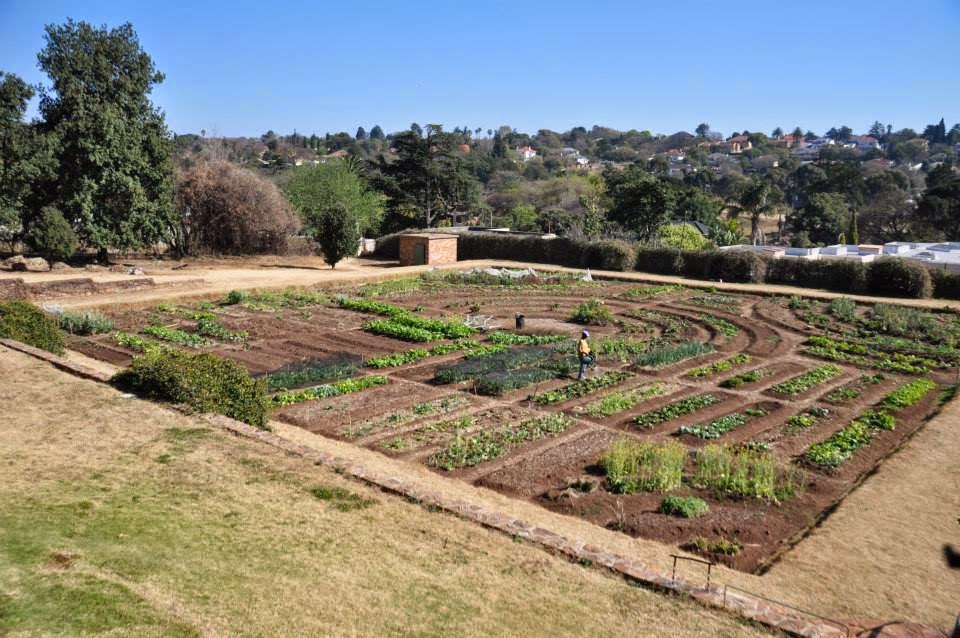 This site and similar sites could also have the opportunity to be a site for agrobiodiversity conservation and education.
Posted by liliana trans-planter at 08:44 No comments:

Posted by liliana trans-planter at 07:38 No comments:

This is dedicated to Mother Earth, on Earth Day.

Here amongst the rubbish, dead dog (who we named Friend) and mess we created a beautiful heart garden and signage made from plastic bags found in the area,  in light of Her beauty and vastness. We owe her everthing. Least we can do is maintain, and celebrate Her! Thank you Mama. WE LOVE YOU! 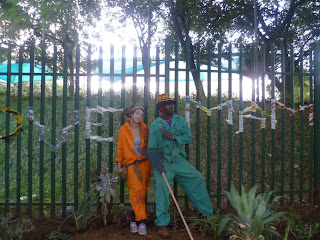 The AMbush Team after a serious day of cleaning, planting, recycling action! 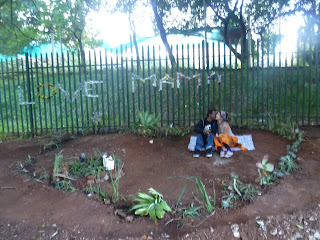 LOVE LOVE LOVE LOVE LOVE. we make functional spaces to celebrate our relationships with each other and to Mother Earth. Use it.
Posted by liliana trans-planter at 23:42 No comments: